Docker in Jenkins in Docker

This page is a work in progress 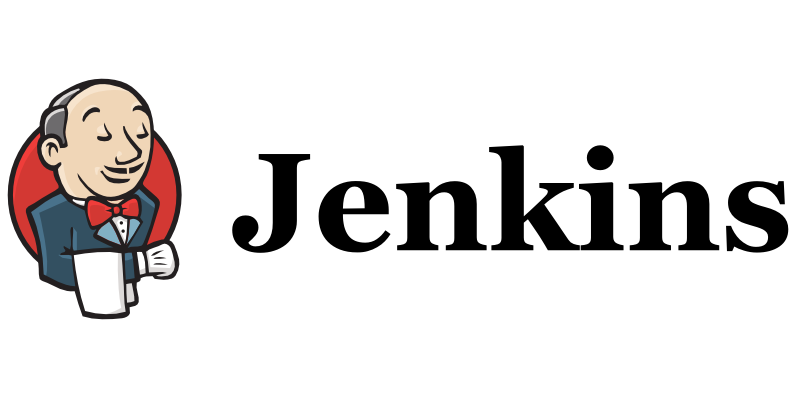 Jenkins is perhaps the most commonly used CI/CD tool for building, testing and deploying applications.

In recent years, the dockerizing of applications has become a standard practice in the industry, and Jenkins is as a result often used for building docker images.

Unlike other popular CI/CD tools like Travis CI or CircleCI, Jenkins is completely self-hosted; This means the developer is responsible for deploying the Jenkins application. The benefit however is that it gives the developer full control over the build environment. Coupled with the fact that it is free and open-source, it isn't hard to see why it is widely used.

Since Jenkins is just another application we have to host, an interesting question arises – what if we were to also dockerize Jenkins itself? This leads to a situation where Jenkins requires access to docker from within a docker container.

Well, you might think the solution is easy - just install Docker in Docker, right? As it turns out, there is no obvious solution for this. The official jenkins/jenkins:lts docker image does not come with Docker installed, so we have to look for workarounds.

This was exactly the problem I faced a few months ago, when I was trying to build a Docker image in Jenkins. It took me a few days and extensive Googling to understand and figure out the problem. I found a number of different solutions, but in this article I will present and explain 3 different solutions.

Before I jump into the solutions, let's first understand how Docker works.

When I first started learning Docker, my impression was that you just have to install the docker binary and it does everything for you. But there is a lot more going on behind the scenes.

Docker actually uses a client-server architecture, kinda like this. 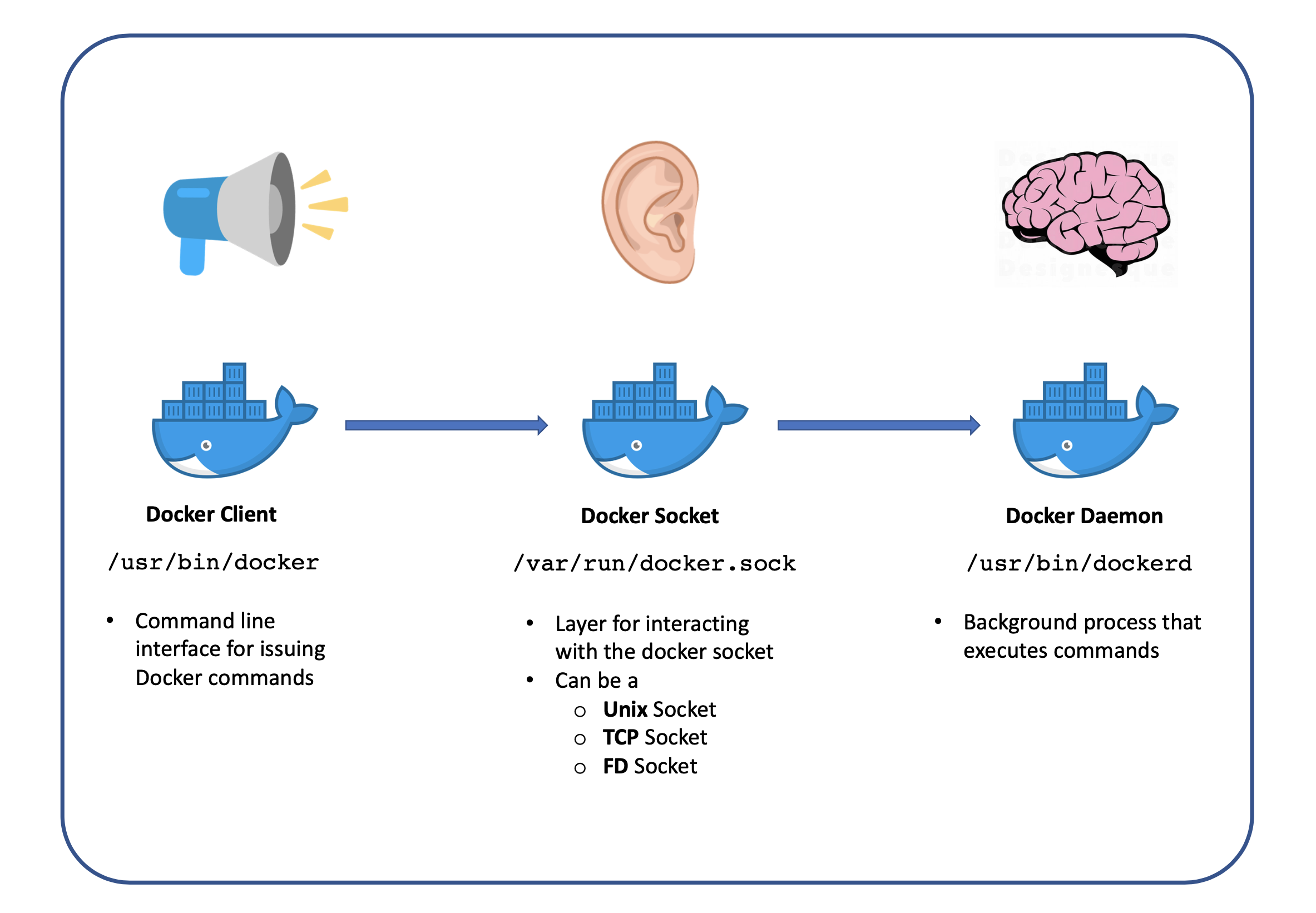 The client refers to the docker binary itself, and is the interface that developers who use Docker are familiar with.

The server refers to the docker daemon, or dockerd, which is a background process that is responsible for executing the actions requested by the clients.

The client communicates with the server via a socket. A socket allows for 2 processes to communicate with each other, in this case the client and server. For those unfamiliar with networking, a socket is a generic networking construct and is not specific to docker. There are 3 types of sockets used in docker:

In most cases, only Unix and TCP sockets are used.

There are actually a number of other components in Docker (e.g. containerd, which can be thought of as the hands in this analogy), but knowing these 3 components is sufficient for understanding the solutions.


Why use such an architecture?

Firstly, it allows for the Docker client to be running separately from the Docker daemon. This allows to issue Docker commands on one host and have it executed on another host. 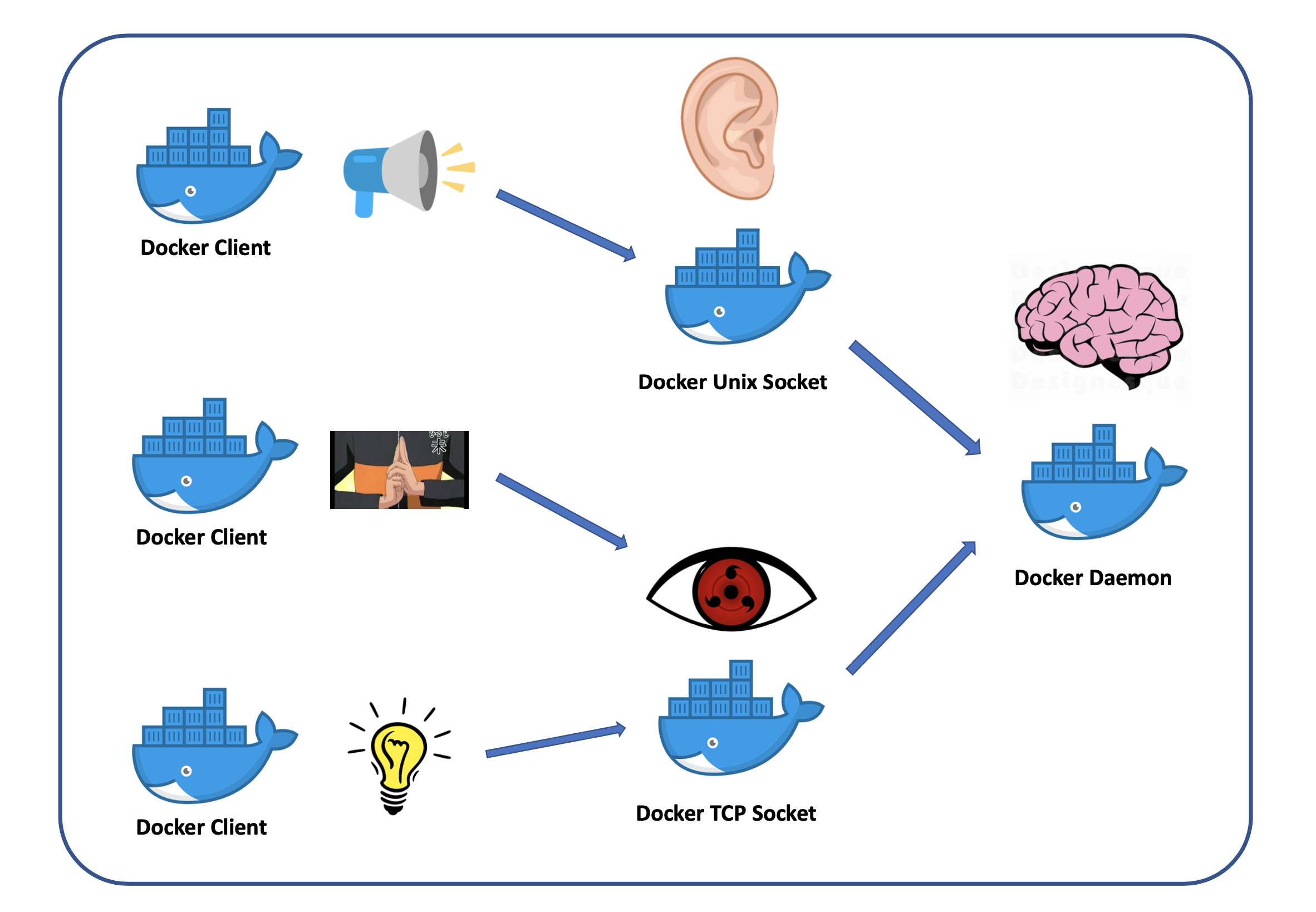 Hopefully you have a better understanding of how Docker works. Let's now look at the different solutions. 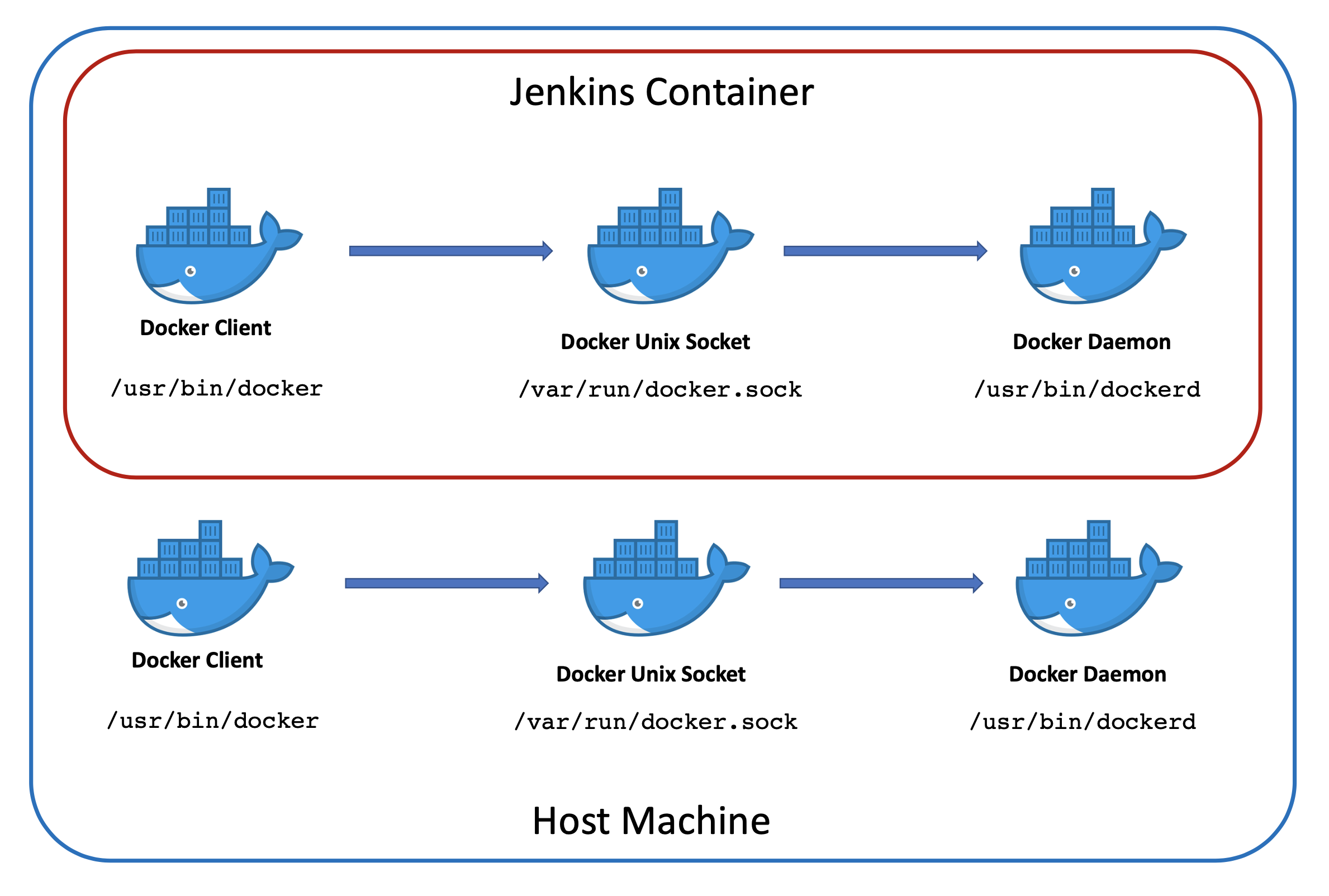 The first solution is to install all 3 components directly inside the Jenkins container. We can do by building a new docker image with docker installed over the official jenkins/jenkins:lts image. A sample Dockerfile looks like this


We can build the image and run a container from the image with following commands:

I personally do not like this solution, so let's move on.

However, this means any containers/images created by the Jenkins container is accessible by the host and vice-versa. A sample docker-compose.yml file is as follows


Solution 3: Run the official docker-in-docker image and expose its TCP socket to the Jenkins container

The saying "the third times the charm" is applicable here. In my humble opinion this is the cleanest solution among the 3. It also took me the longest time to figure out. 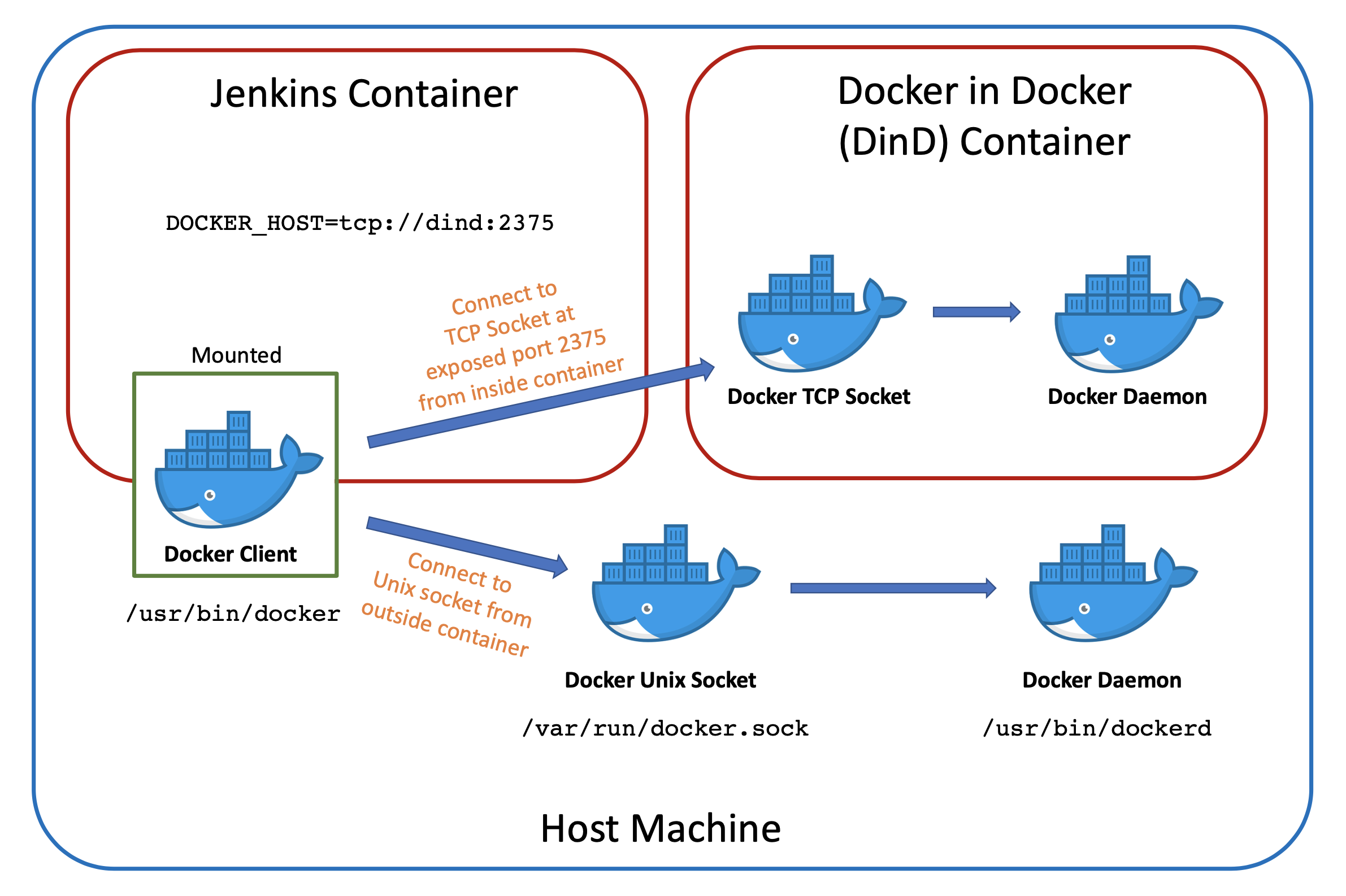 Docker in docker is a concept not exclusive to this use case. It had been requested many times by developers for a wide variety of use cases. This led to the creation of the official docker-in-docker (also known as dind) image. Incidentally, this image is used internally by Docker (as in the company) to build and test docker itself. Talk about Dockerception.

This image contains a docker daemon and has a TCP socket bounded at port 2375 (for unencrypted traffic) and 2376 (for encrypted traffic with TLS). The idea is the mount the docker client into the Jenkins container and use it to connect to the TCP socket over the docker network. This can be done by setting the DOCKER_HOST env variable to tcp:// in the Jenkins container.

In the docker-compose.yml file below, a dedicated network jenkins_dindis used to connect the Jenkins and dind image, so we can use port 2375 in this case.

I hope this article helps you to better visualise and understand the Docker architecture, the Docker in Docker problem, as well as the various solutions.

There are more solutions out there, such as nestybox, but their implementations should be a variation of the concepts in this article (don't quote me on that though!). I might add on to this article if I find more interesting solutions in the future.

The most ideal scenario would be for Jenkins to release an official solution for this. In the meantime, this a fun problem to solve. That's all folks!